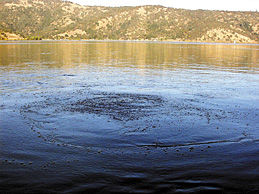 Near the middle of Clear Lake, a thermal spring from a fissure on the lake bed creates a bubbling cauldron on the surface, evidence of continuing volcanic activity in the region.
A hundred miles north of San Francisco, nestled in the heart of the coastal mountains and rarely visited, is California's largest freshwater lake and perhaps the oldest lake in North America. Covering around 68 square miles in area, Clear Lake stretches diagonally across the landscape from northwest to southeast, its three "arms" joined by a narrows. On the shoreline just south of the narrows, the lake's guardian, a once-active volcano known as Mount Konocti, looms several thousand feet above the surface, its eastern flank descending directly into the murky, green-brown water.
Inseparable companions, Clear Lake and Mount Konocti together possess a wealth of legend, beauty and scientific significance. But several twists of fate in the past half-century have obscured the many charms of this place; in the popular mind, Clear Lake has been forgotten. Scientists and adventurers, on the other hand, are among those who find it hard to keep away. Inside Mount Konocti's cooled magma chambers, the world's largest cavern and tallest volcano shaft may await discovery. Poised on the Pacific's Ring of Fire, Mount Konocti
may have spewed out molten lava as recently as 200,000 years ago.
While Konocti now rests, its volcanic heat still lingers under the lake. Only eight miles above an active magma chamber, the waters of Clear Lake roil with volcanic angst. About 250 feet off Horseshoe Bay (There is a bubbler at 39º 01.482'N and 122º 46.360'W. It is 1/2 nmile west of Shag Rock), near the middle of the lake, a bubbling surface cauldron a few yards in diameter churns and lifts the water with enough force to alter the course of boats and redirect the waves. About 35 feet below this perennial turbulence, a thermal spring jets from a great hole in the bottom of the lake. Of the many bubbling fissures that lend effervescence to Clear Lake, this particular vent is the mother of them all—a tectonic yawn broad enough to invite human passage. 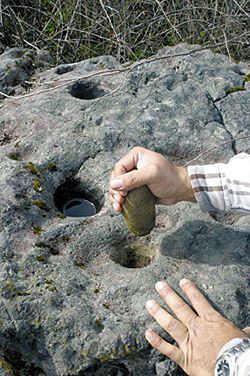 Meanwhile, Clear Lake's birds are flourishing. Almost 9,000 western grebes live there, along with ospreys, wintering pelicans and nesting bald eagles. They are evidence that local bird life is recovering from an error that once made Clear Lake a poster child for environmental transgression. For years, beginning in 1949, DDD was sprayed on the lake to control gnats; as this biocide worked its way into the food web, it poisoned numerous organisms, notably the grebe, which dropped from 1,000 nesting pairs to almost none. Rachel Carson in 1962 publicized this incident in Silent Spring. As her book sparked an ecological revolution, it also stigmatized Clear Lake.
While still recovering from these mistakes, the area was dealt yet another traumatizing blow. In 1990, the Sulfur Bank Mine on the northeastern shore was declared a Superfund site. The sparklingly clear spring water in the 90-foot-deep Herman Pit, situated above lake level, seeps through shoreline mine tailings before entering the lake. On the way, it may be picking up sulfuric acid and mercury and releasing them into the aquatic system. Remediation efforts completed over a decade ago restored the original shoreline and reduced the flow of rainwater through the tailings. They removed waste rock that had piled up in the lake, stabilized the mining debris with concrete, added soil, and revegetated the land.
Lake sediments close to the mine contain mercury levels hundreds of times higher than sediment at the opposite end of the lake, 18 miles away. Yet while much reporting has spotlighted Clear Lake for the Superfund designation and the high mercury levels, media coverage has consistently overlooked scientific data indicating how Clear Lake's ecosystem effectively prevents much of the mercury from entering the food chain.
In the relative murkiness of Clear Lake is a biological filtering system thought to control how much methyl-mercury actually enters the higher levels in the food chain. Methyl-mercury is found in most freshwater and saltwater fish, and can pose a health risk when big predator fish are consumed in sufficient quantities.
Fish consumption warnings, issued in 40 states, include advisories for the San Francisco Bay and Delta, along with 13 other California water bodies, including Clear Lake. Yet, while Clear Lake has some of the highest levels of mercury loading in the nation, these levels are not reflected in its fish. "A lot of mercury is entering Clear Lake, but it looks like much of it isn't getting into the fish, "says Darrell Slotton, a UC Davis researcher. Slotton, who studies mercury bioaccumulation in water bodies all over California, says that the eutrophic character of Clear Lake may greatly mitigate the impact of mercury. In less murky waters, mercury gets into fish at much higher levels. Some clear, small lakes in Wisconsin contaminated by only a single gram of mercury have fish with higher methyl-mercury levels than fish from Clear Lake, a water body that contains tons of mercury. Mercury levels in fish from the Davis Creek Reservoir— southeast of Clear Lake near the Yolo County border—are three times higher than in fish from Clear Lake, even though mercury inputs at the reservoir are lower.
"All that biomass and suspended sediment in Clear Lake," says Slotton, "acts like a magnet for mercury." Despite rumor, the lake water itself is safe both for swimming and even for drinking. Scientists at UC Davis have calculated that a person could drink untreated Clear Lake water for 80 years in order to consume the mercury contained in a single fish dinner.
Reassuring the public that the water in Clear Lake is perfectly safe has been a different matter; the presence of a Superfund site has posed serious problems for the lake's economic health and its already tainted reputation. But at least there has been one positive outcome: funding for extensive ecosystem research.
Clear Lake is now one of the best-studied geological basins in California. And while the Sulfur Bank mine was once an eyesore, remediation, nature, and time have done a good deal to improve its appearance (though recent data show that its mercury leaks have not been reduced in the process.) Developers are planning to drill test wells for geothermal resources near the Herman Pit; their proposed power plants have been excluded from an ordinance that otherwise bans development within a half-mile of the lakeshore. But the community is wary. More than 200 citizens attended a public meeting to protest the geothermal power plant proposed for the Superfund site.
The strong grassroots effort to protect the lake—hundreds of watershed volunteers, a Sierra Club chapter with a large and active membership, and the combined Pomo and Wappoo tribal groups' coalition for environmental resources—suggest that Clear Lake's era of environmental naiveté is long past. Meanwhile, science still vies with mythology to explain the features of this peculiar landscape. If and when researchers can fully describe the elusive passages through its breathing mountain, the gassy hole in the bottom of its lake, and the ecosystem function that prevents the mercury from showing up in its fish, then perhaps mythologists can explain why Clear Lake somehow remains forgotten.

The Clear Lake basin formed between two and three million years ago. For a lake to exist this long is extremely rare. Most lakes gradually fill with sediments and evolve into marshes and then meadows. Clear Lake, however, has remained unconquered because its lakebed is self-adjusting. Like many of the inland valleys in northern California, the lake sits in a fault-controlled basin. The faults along its northern edge comprise a so-called "trap door graben" that sags downwards under the immense weight of the sediment load. The result is that the lake floor drops at the same rate that sediment washes in, about two millimeters per year.
As the old faults maintain Clear Lake's ability to impound water, younger faults protect it from geological complacency. The active Konocti Bay fault, a northern cousin to the San Andreas Fault, runs north-westerly into the middle of the lake. Only about 10,000 years old, it still produces earthquakes. The shoreline and drainage of Clear Lake have been all over the map, once draining into the Sacramento River, then later emptying west to the Russian River and into the Pacific Ocean. A landslide two to ten thousand years ago blocked the western outlet, raised the lake level, and forced a southern water exit via Cache Creek.